Skip to content
The south transept seems to have been used as a chapel since it was built around 1240. Repair works in 1784 discovered two niches in the wall similar to the piscina in the chapel, which show that there was an altar there in the medieval period. At the same time two stone coffins were found, also of medieval date. A ledger stone with a long inscription in the south west corner of the transept that was erected in 1560 shows that members of the Holcott family were buried in a crypt beneath the floor from 1292, so it is likely that the transept would have been their family chapel. In the 18th and early 19th centuries the transept was used as the vestry.

Today the south transept is a splendid jewelbox-like chapel that owes its character to the marvellous decorative mosaics and furnishings paid for by William West of Barcote Manor and completed in 1892. West commissioned the refurbishment of the transept, returning it to use as a chapel, in memory of his wife, Clara Jane. Clara died in 1888 at the age of 37, after a short illness. William West was a millionaire who made his fortune as a director of the Great Western Railway. His association with Buckland seems to have come from his falling out with the vicar of Littleworth church, where West had offered to build a belfry and install a ring of bells. The vicar thought it impractical and declined; in a fit of pique West then removed the remains of his child buried at Littleworth to Buckland, to which church he subsequently gave various gifts and endowments. The new vestry on the north side of the chancel, the organ, and the large brass eagle lectern are all gifts from West.

The mosaics in the south transept were designed by Henry Holiday and largely executed by Powell’s, a renowned stained glass firm based in London that worked with many leading Victorian architects. Above the window cill level the theme is the Te Deum – images on the east wall depict Saints Michael, Gabriel, Raphael, and Oriel. On the south wall are Saints Peter, James, John and Andrew. On the west, the prophets Isaiah, Jeremiah, Ezekiel, and Daniel, and the martyrs Abel, Zecharia, Saint John the Baptist, and St Stephen. Below cill level the theme is the Benedicte Omnia Opera (A Song of Creation) – twelve images in lozenge frames show the animals and scenes from the Benedicte – the Earth with clouds, moon, and stars, angels, trees (the green things, a well (the waters), a ship (the winds), whales, doves (the fowls of the air), deer (the beasts and cattle), a boy and a girl singing (the children of men) and a bishop giving a blessing (the priests of the Lord). The images are framed by rich decorative vines and crosses on a blue background. The rich decoration continues on the Victorian stalls, where lizards, dragons, and eagles adorn the arm rests. The south window depicts the Ascension of Christ to heaven – Christ and the Virgin Mary in the centre are flanked by a crowd of figures including women holding babies and leading small children by the hand. It is possible that one of these figures is intended to represent Clara Jane and the child that she and William lost who was buried at Littleworth. Even the floor is decorated, with a pattern of overlapping circles and quatrefoils.

As a whole the transept is a fantastic example of late Victorian decorative art, by the best commercial artists of the period. It is also a touching memorial to a woman that William described as his beloved wife, whose coffin at her funeral was, according to newspaper reports, almost hidden under a wealth of flowers from her family and friends.

The stained glass in the south transept is part of the overall theme of the Te Deum that encompasses the mosaics on the walls and even the carved decoration to the furniture – songs of praise to God the Creator by his creation. In the south wall the window depicts the Ascension of Christ to heaven – Christ is at the apex of the window flanked by three angels, below, in the central section of the window, Mary and three apostles kneel in adoration. Below them are figures of women and children flanking a seated Christ. It is possible that one of the female figures represents Clara Jane West, in whose memory the chapel was decorated in 1892. In the east and west walls are two smaller windows, whose simple glass quarries are decorated with a foliate design of oak leaves.

All of this glass was designed by Henry Holiday, a first rate pre-Raphaelite artist and friend of William Morris and Gabriel Rossetti who trained with Burne Jones and would go on to work for Powell & Co. Holiday was a lifelong socialist and supporter of the Suffragette movement; his stained glass windows are full of life with even peripheral characters carefully portrayed and, for the period, remarkably strong depictions of women. His glass work can also be seen in the chapel at Worcester College Oxford (considered his finest commission); he is also responsible for the original illustrations in Lewis Carroll’s The Hunting of the Snark.

There are at least two Mass dials scratched into the exterior stonework of the church – one on the south wall of the south transept and one by the south door, where it was later made useless by the addition of the south porch! A mass dial is a circle with a small point or shallow hole for a stick in the middle, designed to be used as a crude sundial. Scratched lines radiate out from the centre point to the edge of the circle and indicate historic service times. Such dials were the only way that clergymen and churchwardens had of keeping time in the medieval period – though the first clocks were invented in the 14th century they were hugely expensive and most parish churches didn’t have one until increasing industrialisation made them affordable in the 18th century.

In 2015, during a choir practice, the South Transept ceiling began to fall in and it was clear that urgent repairs were needed. The Transept was closed for public safety. The re-roofing was undertaken by local contractor PG Hawkins between January and April 2016 at a cost of some £70,000, using funds raised locally. 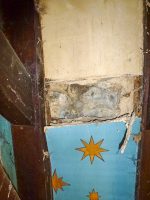 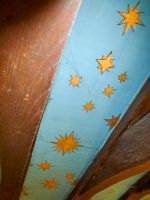 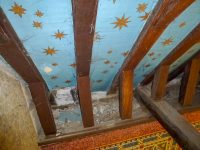 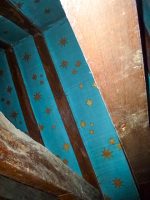 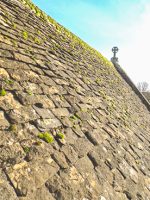 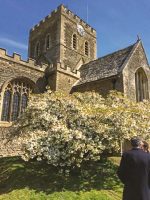 We use cookies to ensure that we give you the best experience on our website. If you continue to use this site we will assume that you are happy with it.OkNoRead More