Skip to content
The organ was built by G M Holdich, probably in the middle of the 19th century. It originally had two manuals and a mechanical action.

We do not know where it first stood, but in 1890 a new organ chamber and vestry was built. Some 7 years later, Charles Martin, an organ builder who was very active around Oxford at the time, rebuilt the organ inside the newly added chamber. He fitted a tubular-pneumatic action, added a Choir division and a third manual.

J W Walker & Sons undertook a modest restoration in 1953, renovating the deteriorating action and cleaning some of the pipework for the sum of £290. This repair work lasted no more than 20 years and in 1972, George Osmond & Co were commissioned to perform similar repairs. Some 20 or so years later the organ was again showing signs of deterioration and neglect. Difficult access to much of the action and pipework had resulted in faults which were not repaired. By 1995, the action had become heavy and increasingly unreliable, there were many ciphers and some stops worked only occasionally.

It was always difficult for the congregation to hear the organ because it was positioned in a cramped chamber, halfway down the Chancel. The Choir soundboard sat in front of the Swellbox and on top of the Great pipework and obscured the egression of sound from the chamber. Sound is also lost under the church tower crossing into the two transepts.

It was necessary to increase the major restoration cycle beyond 25 years, and improve access for tuning and ongoing maintenance.

Six organ builders were consulted and all advised and proposed alternative schemes for our consideration. After much discussion, Wood of Huddersfield were awarded the contract. Geoffrey Heard undertook SSL installation, and S P Urschel were the electrical contractors.

On 7 June, the rebuilding work began. The stoppers were removed and lubricated, and the caps unscrewed to aid cleaning. The Great soundboard now sits in front on timber supports and raised about one foot higher than before. This is to allow access to the new under-action. The new slider motors sit on the top at the right hand side of the Great soundboard. They are activated by the stop-knobs at the console and operate the sliders under the foot-holes of the pipes above.

Meanwhile in the Huddersfield workshop, the console was taking shape. Reduced to about half the depth, the stop-jambs were heightened to accommodate a more logical layout of the stop-knobs. The thumb and foot pistons were in place, and the keys fitted.

Back at the church, the organ chamber had lighting installed and a new power supply for the blower and control circuits. The Swellbox was reassembled, and the Choir was placed on top. Pipework was placed inside the Swell, and at the rear of the Great soundboard.

By mid-August, all the pipework had been installed, and the SSL components and interconnections were now in place. The blower had to be reconditioned during the last few weeks of August and September, and all that was needed was a thoroughly good tune before the organ could be played once more. 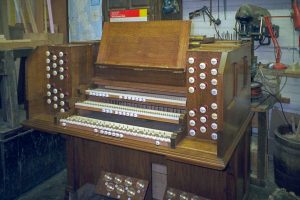 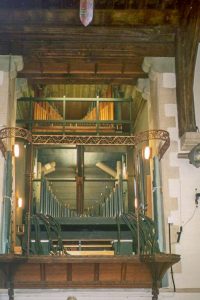 Thanks to Bernard Martin and OxRecs for providing the text and photos used on this page.

We use cookies to ensure that we give you the best experience on our website. If you continue to use this site we will assume that you are happy with it.OkNoRead More